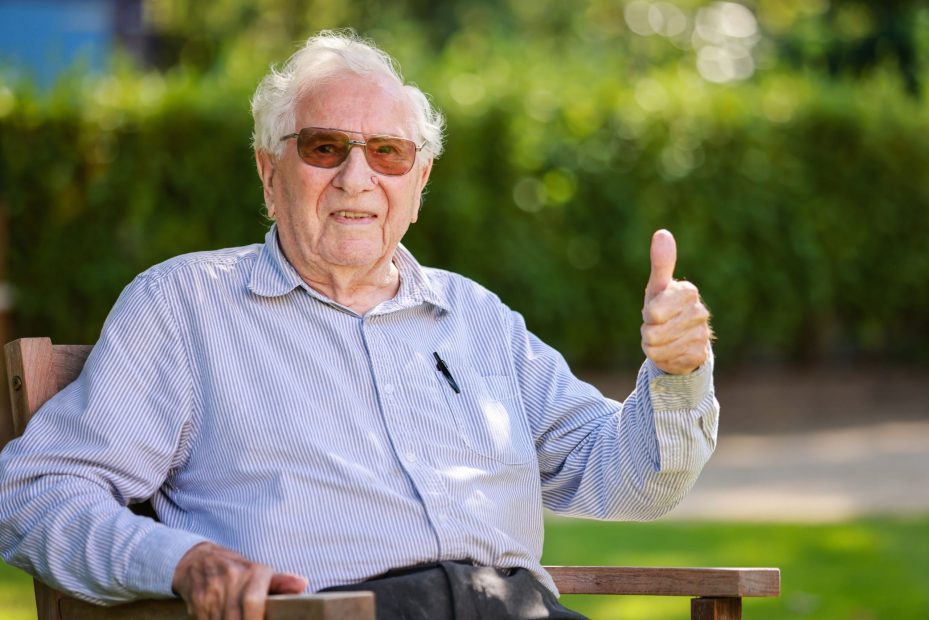 Great Oaks resident, 101, enjoys a dance to live music at his birthday party

We were thrilled to celebrate Andre’s 101st birthday last week which saw him have a dance along to some live music that we organised for his special party at Great Oaks.

Andre Mauger was joined by his fellow residents and the team for a dance to singer Mike Sidaway, who performed for Andre’s birthday on Tuesday, August 31st. Mike took requests from the residents so that he could perform their favourite songs for them to sing and sway along to, including tracks from Elvis and Frank Sinatra, famous musicals, and the hit film, The Sound of Music.

As a special treat for Andre, Mike took to the piano to play one of his favourite songs, Moon River, which shot to fame when it was sung by Audrey Hepburn in the film ‘Breakfast at Tiffany’s.’

Andre received a birthday card from the Queen to celebrate the momentous occasion, as well as receiving calls from his daughter, Catherine, who lives in Bournemouth, and his son, Simon, who lives in Canada.

Maggie Tomlin, manager of Great Oaks, said: “It’s not every day that we have a resident who turns 101, so we wanted to treat Andre to a special party to mark the occasion. Andre is a happy-go-lucky man who always raises a smile with our team and encourages us to ‘Take life as it comes.’ He’s a great friend to many people at Great Oaks and we love having him here.”

Andre and son Simon appeared on TV and in local and national newspapers last year when Simon made the 4,000-mile distance to see his dad at Great Oaks for the first time in our Covid-secure visiting lounge in November, in-between the first and second UK lockdowns. At the time, Simon said that his dad ‘almost ran into the room’ at the start of the visit.

The visiting lounge enables care home residents to meet with their family members using a floor-to-ceiling Perspex screen, intercom system and hearing loop, offering a safe and comfortable, dedicated place for face-to-face interaction. Care home residents are now also able to have visits in their rooms and the gardens of the care homes with their relatives, following all of our residents and staff being offered the chance to have a Covid vaccine.

Andre, who was born in Pavilly in upper Normandy in France, worked as the Chef de Cuisine at the Pavilion in Bournemouth for over 20 years before retiring aged 65. He then came out of retirement five months later to work part-time at the BIC, where he completed stock control and mentored junior members of the kitchen team until he fully retired at 70.

Andre lived in his own home until he turned 99 when, after suffering a fall, his family contacted the our team about offering him extra support in the lead up to his 100th birthday. At the care home, Andre enjoys chatting to his friends and taking part in fun word games.

For more information about the care services available, go to Our Care