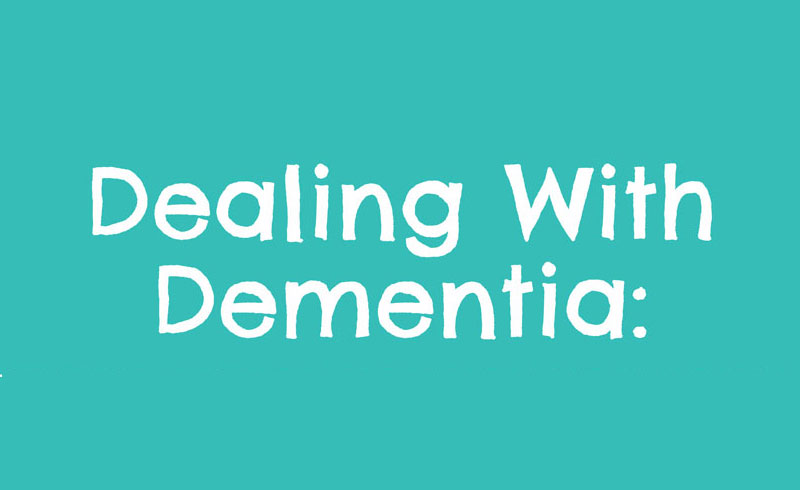 In the UK alone, there are around 850,000 people with dementia – a number that is expected to rise drastically by 2050. However, although the syndrome affects so many, due to the fact it comes in a variety of forms and impacts every individual differently, scientists have been unable to find a cure.

Dealing with dementia is something that we feel is important which is why we’ve created this infographic. It highlights some shocking stats about the syndrome and focuses on the stages of dementia from noticing symptoms to getting a diagnosis.

But first, here’s a few things you need to know:

Dealing with dementia: What is dementia?

Dementia refers to a group of symptoms (including memory loss, issues with problem solving and personality changes) that contribute to brain health decline over a long period of time, eventually having a detrimental effect on the individual’s daily life.

What are the different types of dementia?

Alzheimer’s disease is the most common cause of dementia and is caused by a shortage of specific chemicals within the brain that help transmit signals around the brain. The lack of these chemicals leads to brain signals not being transmitted correctly.

Along with Alzheimer’s disease, vascular dementia is also one of the main causes of dementia. This type of dementia occurs when the brain has an impaired supply of blood flow – such as after having a series of small strokes. Because the brain cells aren’t getting the blood they need to function correctly, they die.

Lewy bodies are small deposits of the protein alpha-synuclein that appear in the nerve cells within the brain. These proteins are responsible for lower levels of important brain chemicals and a loss of nerve cell connections.

Dementia that affects the frontal and temporal lobes of the brain is known as frontotemporal dementia and causes problems with behaviour and language. People with this type of dementia usually become socially isolated and no longer enjoy spending time with loved ones.

Mixed dementia is a condition in which more than one type of dementia occurs within the brain. In most cases, the plaques associated with Alzheimer’s disease are present as well as the blood vessel changes linked with vascular dementia.

Each type of dementia has its own unique set of symptoms, however, these symptoms can often include:

What to do if you suspect a loved one has dementia

If you begin to suspect that your loved one is showing signs of dementia, it’s important to visit a General Practitioner as soon as possible in order to get a diagnosis.

The first stage of getting a diagnosis is to undergo a series of blood tests and other general health tests to rule out the possibility of any other underlying conditions. This is necessary to determine whether other conditions are causing the same symptoms as dementia.

After blood tests have been carried out and other diseases have been eliminated, it’s then time to undergo cognitive testing by a series of health care professionals.

Cognitive testing involves several psychometric tests that assess numerical, verbal, abstract, spatial and mechanical reasoning abilities – all areas that can be affected by dementia. It highlights any areas that an individual is finding unusually difficult.

Finally, if the GP concludes that your loved one does have dementia, they will be referred to other specialist health professionals such as memory clinic nurses. Certain medications can also be prescribed that slow down brain health decline.

Dealing with dementia after a diagnosis

Dealing with dementia after a diagnosis can be extremely challenging for both the individuals that have been diagnosed as well as their family members. Nonetheless, although all forms of dementia are incurable, there are a variety of things that can make it easier to deal with.

For example, attending regular local support groups is a good opportunity to be surrounded by others living with the same condition, giving the person with dementia and their loved ones the chance to talk about their feelings and the progression of the disease.

There are also a variety of health care professionals such as those at the memory clinic that can offer ongoing support and therapy sessions to make the disease easier to cope with.

Check out our infographic below.

Find more information about dealing with dementia on our website.